I’ve never been one for running. In high school, one of my track coaches was convinced I’d be a great fit for the 400-meter relay. Coach posted event assignments for our upcoming meet and there was my name, listed as a relay member. I ran exactly one 4×4 relay in my high school career. Athletic and fast are not synonymous. I’m proof.

Running hurts my knees, makes my hips ache, and seems to spur a litany of new injuries every time I try to legitimize my “runner” claim. As I’ve matured into my mid-thirties, I’ve taken up wogging (walk/jog interval combo) as a frequent form of exercise and alternative to “real” running. I’ve resigned myself to being a wogger, and I’m happy with that decision…almost all the time.

An advertisement for the Yellowstone Half-marathon popped up in my social media feed last winter. While I watched the footage of runners trekking through the mountains, the thought occurred, “If I were going to be crazy enough to run 13.1 miles all at once, I’d want it to be with scenery like that.”

I registered for the race that day. Hey—I’m an all-in or all-out kind of gal.

Nerves set in shortly after registration, and I decided I needed someone to hold me accountable for following through with my current form of insanity. My seventy-year-old (and in great shape) dad finally succumbed to my pestering and registered.

Time vanished in a blink, like it does, and we were making our way up to West Yellowstone, Montana for the race. Neither of us truly trained, which made us both a little nervous. But we’re not quitting stock, Dad and I. So we pulled on our big kid undies, and leaned into the idea that finishing was our only goal.

On race day, we woke up outrageously early, quietly slipped out of the hotel room where the remainder of my little family lay sleeping, and walked in groggy silence to the starting line area. We gathered with the other 2,400 racers, liberally applied bug spray (they grow mosquitos the size of hummingbirds in that part of the world), watched the sun rise, and pretended we knew what the hell we were doing.

All 50 states and 13 countries were represented. People of every age, stage, shape, size, and color lined up in their assigned waves.

Race people (at least in my experience) are the best kind of people.

They are the kind of people who wake up at 5AM on a Saturday in June and elect to run, jog, wog, or walk 13.1 miles through some of the most beautiful country in the world…and they are HAPPY to have the chance to do it.

The course was gorgeous. Miles 1 through 5 were fed by adrenaline, and went by relatively quickly. Miles 5 to 7 were comprised of a steep climb to the highest point in the racecourse and thus included a lot of breathy cursing. When I hit mile 10, my body was ready to be done. And miles 11-13 seemed to take as long as all the previous miles combined.

At every turn, up every hill, down the rocky portions of the race route, and at each of the water/aid stations, people cheered for each other, encouraged each other, and in general, made our scattered group of all kinds into a singular body of one kind—racers. 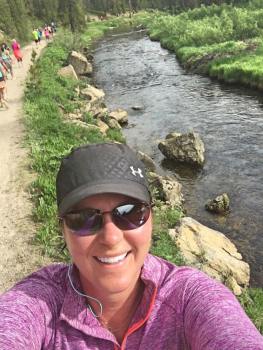 Crossing the finish line, my dad was waiting. Yes. He beat my time by a solid 10 minutes—that stud. Hubby and the three munchkins were also waiting, cheering for Mommy, and smiling ear to ear at all the runners crossing that line—completing the accomplishment they’d set out to do.

There is no standard of vanity, which must be met to participate in a race such as this. Which is what made the experience most memorable for me.

I am strong. Everyone who crossed that line is strong. No matter how quickly it was done, the fact that it was done is evidence of strength and vitality and vigor.

I was proud to finish my first half-marathon, and proud of my dad for doing the same. But I was equally thrilled for each of the racers. From the man who finished first, averaging under seven-minute miles through the freaking mountains, to the last competitor who crossed well after the official cutoff time—but to the loudest reception by far, I was impressed and encouraged and thrilled to be within the company of such people. 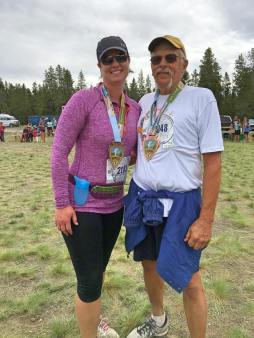 Obviously, trekking 13.1 mountain miles is not something everyone is capable of doing, but I would argue it is something more people can and should do, despite their belief otherwise.

If you’re up for an adventure; if you’re someone who can encourage others, high five, smile, and put one foot in front of the other, you can do it. You should do it.

This race culture is a club with open enrollment and the best kind of people.

Your people are calling you.

We’ll party at the finish line.

*This race was organized by VacationRaces.com

I am in no way affiliated with VacationRaces, nor was I paid to write about their event. It was a fantastic experience for both my dad and me, and I strongly encourage others to consider giving their events a try—I don’t need to be paid to say it. 😉

iThere are no comments