There is a big, scary, unimaginably ugly, sociopathic monster that exists…the real deal…no fairy tales needed. He is real…SHE is real. She lives and breathes to sabotage the human spirit. She is especially fond of women.

I know her well. She has made her way into my life, into my mind, and recently…I have seen here where I NEVER wanted her to go…with my daughter.

There are many “it” words in our current vernacular when we discuss raising girls. Words like self-esteem, self-image, confidence, and intrinsic value come to mind. These are powerful words—important words. However, in my opinion, they are all part of a bigger word…a more accurate word.

That word is self-respect.

Why do we de-value it? As a whole, women as a group, I mean…we attack one another, attack ourselves internally, we wear ourselves down. We make it harder for our gender to maintain and exercise self-respect.

We feed the monster.

In hindsight, I should be incredibly grateful the monster didn’t find me until I was beyond the treacherous landmine filled landscape of junior-high, high school, and college. I see her now, attacking the youngest of us.

Triumphantly, I do have periods of time when I brandish my sword and fight her off for any number of days, or even weeks. Heck, in the past nine years, I may have held her at bay for an entire month…once…maybe.

She has learned to hibernate.

She will wait until I crack. In an instant of poor judgment, I will take the bait. I will compare myself to someone else—measure my value with faulty tools. This diminishes my self-respect and the monster feeds. She grows in strength and battle begins again.

I recently read a blog by Rachel Macy Stafford.

My oldest daughter is painfully shy. She has a will of steel, but despite this strength, she is fragile. The simplest of criticisms or sarcasms can shatter her. I have seen the monster at her door.

With the privilege of growing up, everyone will be faced with moments—opportunities, that allow the monster make her way in. It is impossible to avoid her indefinitely. That is a truth we must understand as parents.

There are also other times—preventable occurrences, where I—Mom, opened the door for the monster and practically introduced her to my daughter. The specific examples are varied and endless, but the end result was the same. In either displaying my own diminished self-respect, or in being influenced by the dark side and submitting to the fear of judgment from others, I encouraged my daughter to lessen her own level of self-respect through my example.

I opened the door for the monster to creep in and feed…to grow stronger…and to weaken the God given value of BEING…and in doing so, lessen the respect—the treasuring of who you are, who I am…who she is.

I find this reality terrifying.

Once she is let in, it is harder and harder to fight her off.

As the day wore on, I began to see the monster creep in and feed. As dancers shed tears, parents scolded their children, or competitors helped or hindered their peers…she was there. I feared the monster would slither to my daughters feet and sidle into her thoughts.

I brandished my sword. And in this case, that meant…I let go.

I reveled in watching. I smiled…and clapped…and I RELAXED. I allowed my self to BE. I hugged and kissed both my girls. I shrugged and nodded at the ups and downs. I made absolutely no attempt to be tied to anything other than the sheer joy of BEING with my daughter as she exercised her will to pursue something she enjoys. We forget sometimes that pursuing the things we love is a gift. We forget (I forget) that the pursuing is as much a gift as any personal improvement or winning.

In embracing the simple gift of her participation and focusing on just being a part of the experience and nothing more, I inadvertently exemplified gratitude for the opportunity to pursue the things that give us joy and happiness. And my daughter inadvertently did the same.

The monster didn’t come, not to me…and not to my daughter.

The battle is never over, but today we won the fight. 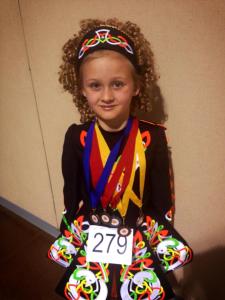